You are here: Home / Archives for Parenthood

As parents, the words we speak to our children have power to shape their actions and their perceptions of themselves. Here are 3 essential things to know about how to communicate with kids effectively.

I’ve always known that words have power. Power to weave vivid stories that set my imagination afire, to cut my soul deeper than any knife, to bring hope when I sit in darkness. As a writer, I’m always seeking for the most accurate words, the ones that really communicate the abstract ideas swimming in my mind.

As a mother, I’ve found that the words I speak to my children have power to shape their actions and their perceptions of themselves. Both what I say and how I phrase things make a difference in how my children respond.

END_OF_DOCUMENT_TOKEN_TO_BE_REPLACED

For picky eating toddlers, mealtime can be a struggle. This simple toddler lunch solution is an fun and easy way to get your eating well. Mom win!

Bed time conversation with Little Man the other night (I’m pretty sure he was stalling):

LM: Mom, why didn’t we have soup for dinner?

Me: Well, it wasn’t on our menu tonight, but I was planning on making soup tomorrow. Would you like that?

Let me explain. Last week I tried out a new recipe for lentil sausage soup, and it happened to be green….

END_OF_DOCUMENT_TOKEN_TO_BE_REPLACED

Kids love to play. Play = messes. And that’s okay with me. Messes mean that my boys are busy exploring, building, growing, and otherwise doing exactly what I want them to be doing. But they also seem to be naturally much better at getting everything out than they are at putting it away again….

END_OF_DOCUMENT_TOKEN_TO_BE_REPLACED

I’m a penny-pincher. When I was little, every week I went through the Sunday paper and clipped coupons for my mom. Now that I’m grown up and running a household of my own, I have become acutely aware of how much it costs to keep everyone fed and clothed. I almost switched to cloth diapering (not really, but the thought crossed my mind) when I calculated how much diapers for two kids was going to cost per year. Kids are expensive, so anywhere I can save money and not lose quality, I try to do so….

END_OF_DOCUMENT_TOKEN_TO_BE_REPLACED

Christmas has come and gone this year, and we had a wonderful holiday. We kept the celebration small this year, and I was grateful for that. Last year, we had 25 people in our house for Christmas dinner (pretty much my husband’s entire side of the family), which was wonderful, but total chaos, too. I loved having a small group of just six this year. I even got to take a nap in the afternoon (which pretty much never happens).

As I’ve thought back about Christmas this year, I’ve realized a few things–successes and failures on my part–that I hope I will remember in the future….

END_OF_DOCUMENT_TOKEN_TO_BE_REPLACED

How often have you wondered how you’re going to get through the day with toddlers? Having a daily routine will make your day so much better together!

On a Tuesday morning a couple of months ago, I had a little Mommy crisis. It was only 9:00 in the morning, and I was already exhausted, cranky, and I could feel my patience flying out the window. We had already read stories, had breakfast, played with cars, gotten dressed, and made a mess with playdough. How in the world are we going to survive until bedtime? I wondered.

After muddling through several days of this, and a lot of brainstorming about how to get out of my mommy funk, I realized I needed to reinstate a daily schedule. Techincally, we had a loose schedule, but ever since Baby Boy dropped his morning nap, I’d felt like our routine just wasn’t working.

END_OF_DOCUMENT_TOKEN_TO_BE_REPLACED

Today for “Mommy School” we made gingerbread men out of paper. He decorated it all by himself. Can you tell? In case you’re wondering, the orange square is the face, the red paper is the smile, and the green scraps are the buttons. If you look really close, you might be able to see the sideways squiggly lines that are supposed to be icing. It’s certainly not conventional, but I was interested to see what he could create with minimal help from me….

END_OF_DOCUMENT_TOKEN_TO_BE_REPLACED

This month I’ve been doing a little project with Little Man on gratitude. Every day in November, I’ve sat down with him and we’ve talked about something we’re each grateful for that day. Then we write each blessing on a leaf and hang it on our “Thankful Wreath.”…

END_OF_DOCUMENT_TOKEN_TO_BE_REPLACED 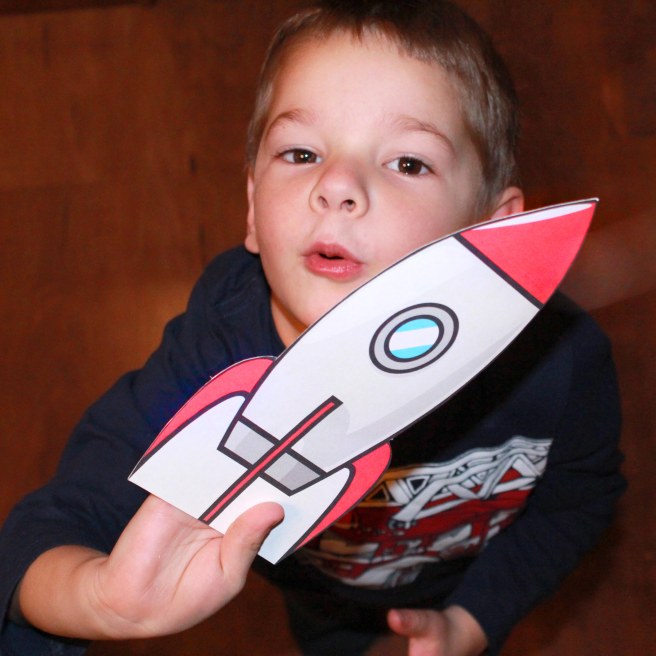 There are so many times every day that I find myself hurrying my three-year-old to do something…brush his teeth, put his shoes on, get in the car, wash his hands, and countless other simple tasks that seem to take him forever. My adorable, yet oh-so-distractable son cannot get from point A to point B without getting side-tracked by C, D, E, F and G.

Initially, I tried to hurry him along with the well known “You have until the count of three” tactic, and sometimes it was effective, but I always felt like it made situations into a power struggle where we both ended up frustrated. So, I started looking for an alternative. And, you know what? I found something that works brilliantly for us. It’s so simple: count DOWN instead of UP.

Specifically, do what I call a Rocket Ship Countdown!

Here’s how it works:

Whenever I need Little Man to do something and he seems resistant, I’ll say, “Okay, let’s do a rocket ship countdown to get started. Five, Four, Three, Two, One, Blastoff!” Most of the time he gets going by the time I get to two and chimes in with “Blastoff” when it’s time. If he doesn’t respond by blastoff, he knows I will pick him up and fly him like a rocket wherever I need him to be.

Yes, I know I’m still counting, but somehow by associating it with rockets shooting into outer space, it becomes fun instead of demanding. I try to keep my voice positive and treat it like a game, so he wants to be involved. It doesn’t always work, but it really gets results most of the time. I have saved myself from hours of whining and staved off quite a few tantrums by simply counting down instead of up.

One of the best gifts my mother gave me, and I hope to pass on, is a love for learning. I grew up in a house with bookshelves in every room and was raised by a mother who dedicated a lot of time and energy to my learning. She created in our home something I call a culture of learning. And, I think it rubbed off. All of her children graduated from college, and we all went into some form of education.

Not that everyone in the world needs to be a teacher, but I admire the atmosphere my mother was able to create in our home growing up. Now that I have kiddos of my own to teach, I’m trying to create a culture of learning in my own home. I hope that by encouraging their curiosity at a young age, they’ll hang onto it when they’re older and not get swallowed whole by video games and texting.

So, how do you create a culture of learning?

I wonder so often if all my efforts are really getting results. And then, I turn around and see Little Man sitting in the laundry basket looking at a book. And my heart is happy.